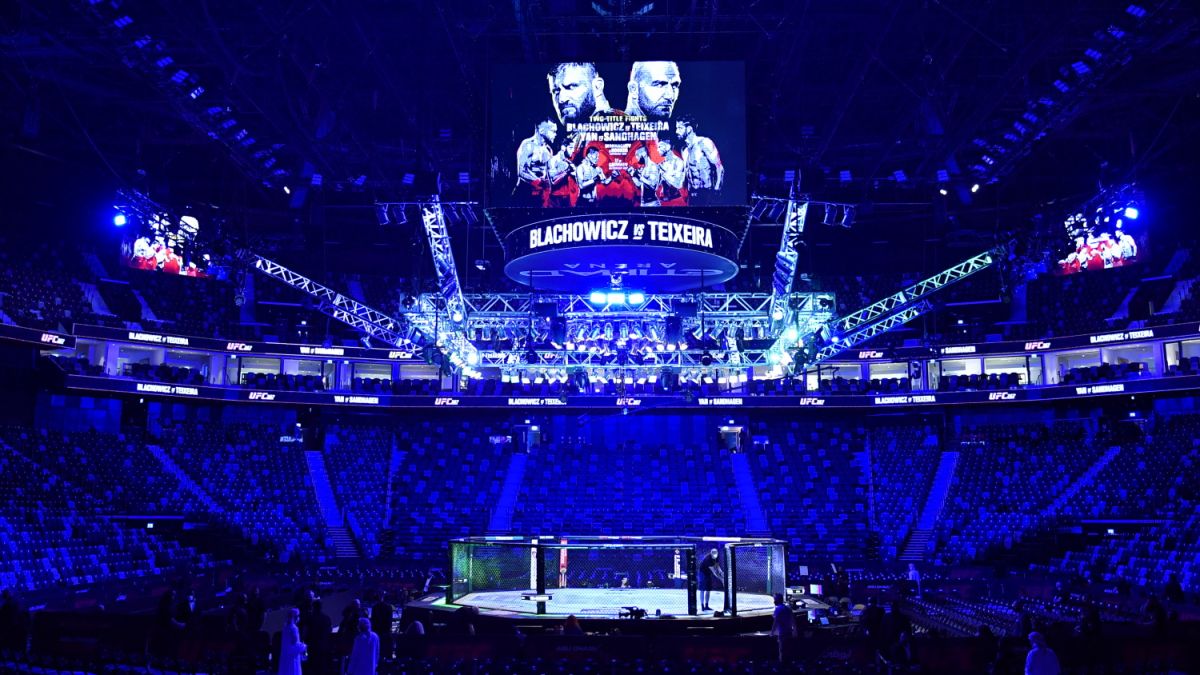 Coming from the Middle East, today's UFC 267 action is already well underway, with a card leading up to two title fights of Petr Yan vs Cory Sandhagen and main event Jan Blachowicz vs Glover Teixeira. Read on to discover how to find a UFC 267 live stream and watch the Abu Dhabi action from wherever you are – with ESPN+ having exclusive coverage in the US.

After a superb defense against the much-fancied Middleweight champ Israel Adesanya last time out, its another tough test for the belt holder with a match-up against one of UFC's most seasoned performers.

Follow our guide below as we explain how to get a Blachowicz vs Teixeira live stream and watch UFC 267 online – plus key details like the start time (note that it's on much earlier than usual) and the cheapest ways to get a UFC live stream on Saturday.

UFC 267 live stream: how to watch Blachowicz vs Teixeira in the US

See UFC 267 exclusively on ESPN+
The exclusive rights for US coverage is with UFC on ESPN Plus, meaning it is the one place to watch it.

Unusually for numbered UFC events, Saturday’s full card won’t be a pay-per-view event and will instead be shown on the sports network’s streaming service ESPN Plus at no extra cost to subscribers.

With the event taking place in the UAE, start times are earlier than cards in the US, with prelims for UFC 267 starting at 10.30am ET / 7.30am PT, followed by the main card at 2pm ET / 11am PT, with Blachowicz and Teixeira expected to enter the Octagon no earlier than 4.15pm ET / 1.15pm PT.

ESPN+ only costs $6.99 per month and allows you to watch online as well as via its mobile app and TV streamer apps on the likes of Apple TV, Amazon Fire TV, Roku, PS4 and Xbox. You’ll save even more if you pay for a year in advance – that costs $69.99 for 12 months.

But there’s even better value to be had, if you grab ESPN+ as part of the big Disney Plus Bundle. As well as ESPN Plus live coverage and documentary action, you’ll get access to the hugely impressive Disney Plus catalogue – which features Marvel movies, every Simpsons episode ever, the complete Star Wars canon, Pixar films, and much more – plus all the great shows and movies that Hulu offers.

And the cost is super reasonable – for all that content, you only have to pay $13.99 a month for the Disney Plus bundle.

How to live stream UFC 267 without PPV in Europe

As we say, you’re kind of stuck if you’re in the US. It’s PPV or bust.

Not so in Europe. Instead, it’s sports streaming specialist DAZN that has the rights.

So if you’re a UFC fan in any of Austria, Italy, Germany or Spain, then get yourself over to the DAZN website.

Even better news…you can actually watch absolutely FREE in certain regions (we can confirm that is the case in Germany, Austria and Spain, for example). That’s thanks to a 30-day free trial, that you can take advantage of if you’ve never had a subscription before.

How to watch Blachowicz vs Teixeira: live stream UFC 267 in the UK

BT Sport has exclusive broadcast rights to UFC events in the UK right now, and this weekend’s UFC 267 action won’t be a PPV event in the UK.

You’ll need to tune into BT Sport 2 for all the action from Fight Island, with coverage beginning on the channel with  the prelims at 5pm ahead of the main show at 7pm. Blachowicz vs Teixeira are expected to enter the Octagon after 9.15pm.

Don’t forget that you can now get BT Sport without a big commitment thanks to a BT Sport Monthly Pass. It costs £25 and gets you all of BT Sport’s goodies – including Premier League football and Premiership rugby – for a whole month.

The broadcaster’s coverage of UFC is also available via the BT Sport app and on its website, so you can live stream UFC on most devices these day.

You can also access your BT Sport subscription or monthly pass from overseas if you’re away from home. To do that you’ll need a VPN to relocate your IP back to the UK as per our guide above.

There are a host of pay-per-view providers offering a Blachowicz vs Teixeira live stream in Canada on Saturday.

You can head to the likes of Shaw, Bell, Rogers, SaskTel, Videotron, Telus or Eastlink with pricing at CAD$64.99. It’s also available on the UFC Fight Pass PPV.

UFC 267 live stream: how to watch Blachowicz vs Teixeira online in Australia

As per usual, you’ll find UFC 267 and Blachowicz vs Teixeira available on PPV in Australia, setting you back AUD$54.95.

The main card is set to take place at 5am AEDT early on Sunday morning. Blachowicz vs Teixeira are expected to make their way toward the Octagon around 6.15am AEDT.

So to watch the fight, you’ll need to sign up via the Foxtel site or Kayo Sports Main Event. Click the link where you can sign up to watch, where you’ll then be able to live stream the whole event via your web browser and devices like Android, iOS, Samsung TV, Apple TV, Android TV, Telstra TV and Chromecast.

You can also catch all the prelims and the main card using UFC Fight Pass.

Blachowicz vs Teixeira live stream: how to watch UFC 267 in New Zealand

Sky Arenais offering New Zealand viewers a Blachowicz vs Teixeira live stream – with the PPV priced at NZ$39.95 for all the main card action.

You’ll want to make sure you’re watching from at least the 7am NZST main card start time on Sunday morning to get all the action.

The headline Blachowicz vs Teixeira fight is expected any time from 9am NZDT on Sunday morning, depending on how the rest of the card plays out.

Blachowicz vs Teixeira preview and predictions

This intriguing battle for the 205lb crown sees two fighters trying to pull off the seemingly impossible, with Blachowicz looking to match the heights of his last fight and Teixeira aiming to become the UFC's second oldest champion behind Randy Couture.

While Blachowicz already had the respect of his peers by the time he lifted the light heavyweight belt following his victory over Dominick Reyes last September, its fair to say the Polish star's standing in MMA circles went up several notches thanks to the manner in which he dispatched the much-fancied Israel Adesanya earlier this year.

With Blachowicz now 38, and Teixeira 42, this is a match up of two of the promotion's more seasoned pros, but the defending champ's greater skillset should prove to be the deciding factor over age and experience this evening.

Who is Jan Blachowicz?

Born in Warsaw, Poland, Jan Blachowicz claimed the light middleweight title in September during the co-main event of UFC 253, where he pulled off a second-round KO victory over Dominick Reyes.

The victory marked an incredible turnaround for the 38-year-old, who began his career in the big leagues with four defeats in his first six bouts.

He since gone on to win nine of his last ten since suffering consecutive defeats to Alexander Gustafsson and Patrick Cummins with Saturday's fight marking the second defence of his title.

Who is Glover Teixeira?

A consistent fixture at the top of the light heavyweight rankings since joining the UFC back in 2012, Minas Gerais-born slugger Glover Teixeira holds the UFC all-time record for most submissions and finishes in the Light Heavyweight division

Despite his consistent performances at the weight, the 41-year-old has only had one previous shot at the title, a disappointing showdown against Jon Jones seven years ago that ended in an unanimous decision defeat.

The veteran fighter has more than earned his second chance at glory, however, taking on a decent list of contenders that has seen him notch up a five-fight win streak.

Blachowicz vs Teixeira latest odds: who is the favorite to win?

Polish champ Volkanovski is marked out as the  favourite to successfully defend his crown, with odds with most bookies coming in at 2/7, while a victory for Teixeira currently hovers around the 5/2 mark.

Blachowicz's outing in the Octagon may well go down as his career highlight, with his first title defence back in March a controlled, calculated performance that handed middleweight champion Israel Adesanya his first defeat of his MMA career.

Its almost a year since Teixeira's last fight – a a third-round submission win over Thiago Santos in the main event of UFC Fight Night 182 in Las Vegas last November.

Alongside the much-anticipated main event, there’s an exciting bantamweight interim championship contest to look forward to between two of the most entertaining men in the division as Petr Yan takes on Cory Sandhagen.

The bill also sees Khamzat Chimaev makes a long-awaited return to action following a debilitating  battle with Covid-19 as he takes on Li Jingliang for welterweight honours, while British hopeful Lerone Murphy will be looking to further enhance his growing reputation as an emerging lightweight name to watch as he takes on Makwan Amirkhani.