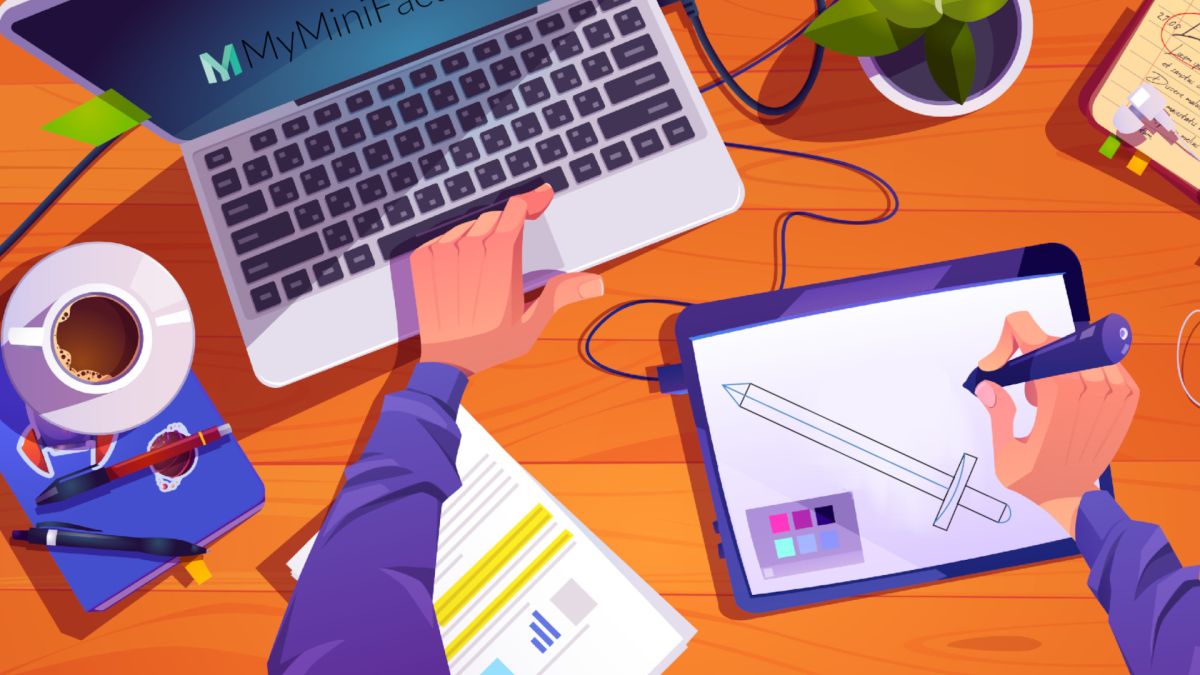 If you own a 3D printer or have previously hunted around online for printable files, chances are you may have stumbled onto MyMiniFactory, a website best known for hosting digital storefronts for 3D artists. While most of the content found on the site is geared towards folk who enjoy tabletop RPGs and wargames, some changes have occurred on MyMiniFactory in recent months that opens up the possibilities not just to digital sculptors who create printable files, but also to illustrators, writers and musicians looking to make some cash from their skills.

The 3D printing hobby may not have a huge community, but it's one that’s growing at an incredible rate thanks to greater accessibility to affordable 3D printing hardware and how well it meshes with existing hobbies. The largest of this is likely to be in tabletop wargames and RPGs, where people who enjoy the genre would be expected to buy injection-molded figurines or kits from an official vendor like Games Workshop or WizKids.

In some cases, this is actually a requirement in order to officially enjoy the game (like Warhammer where using non-official armies is taboo), but with 3D printers becoming cheaper and more advanced at an incredible pace each year, more people are jumping into the world of printing to explore new hobbies that were previously inaccessible.

As mentioned, while the name might imply that tabletop and board game miniatures (or at the least, small figurines), you’re now likely to see all sorts of things on MyMiniFactory that will appeal to a wider range of people outside of the gaming community – from DIY Steampunk lamps and immersive RPG music management, to open-source museum Scan The World.

Outside of the sheer variety of printable files you’d find, MyMiniFactory has actually introduced features to the site that just makes sense, especially if you’ve been on the printing scene for a while. It’s hardly the only 3D file website available, but traditionally there are a few hoops or systems you would use to make sure you’re getting your files from a credible source and, more importantly, that the artists who have created the work are getting fairly compensated.

Artists could create their own digital store using a system like Shopify, but this makes them difficult to locate if they don’t have sufficient marketing and an active social media account. You'll also find bulk STL files being sold as a package deal on various digital marketplaces, but many of these don't credit the original artists who created the work, so you could be left unsure if you've just purchased stolen content. It’s not impossible to navigate, but it makes the process of setting up a business selling 3D printables more of a nuisance than it should be.

The ultimate one-stop-shop for geeky creatives

To fix these issues, MyMiniFactory has instead started to offer pretty much every service you’d need to start selling your work, ditching the previous requirement for external sites for creatives who wanted to branch out. For example, many established artists have a Patreon where they offer a large discount on their catalog to subscribers in exchange for a small monthly subscription, with the files themselves being made available to purchase on MyMiniFactory or downloadable via a file hosting website for free subscriber rewards.

Now, MyMiniFactory has rolled out ‘Tribes’, where you can choose to support your favorite creators directly from their storefront, either with one-off donations or with a monthly subscription. You can even choose to do this publicly or anonymously, and attach a message – ideally thanking the artist -, while being provided with the same loyalty rewards set by the creator. Full transparency is available and the creators have a great deal of creative control over how they want to set up their Tribe – with the ability to post upcoming releases, ask for community votes on what they should make next, and advertise any upcoming sales.

And it's not just Tribes that caught my eye, with MyMiniFactory now also offering a crowdfunding platform on the site that artists can use to finance projects and releases, something that would have previously needed to be navigated on dedicated crowdfunding sites like Kickstarter. Elsewhere on the site, you’ll find tutorials and articles hosted on the dedicated ‘Stories’ section, basically introducing in-house community forums and blog posts, as well as official design competitions created by small creators and established faces in the 3D printing space.

While all of these systems are available externally, It’s clear that MyMiniFactory has worked hard to make a Jack-of-all-trades space specifically for small creators and designers trying to set up shop and be fairly compensated for their skills.

I spoke to the MyMiniFactory CEO, Nebo Nikolic, who made it clear that they were a community-first business trying to provide a space for artists to succeed. “If Disney were to come knocking and ask for a collab, we would say no” he laughed, adding “we’re a space for small creators looking to create a sustainable business, even if they don’t have any prior marketing or eCommerce skills. We just want to provide them with all the tools they need to succeed”.

He also expressed that despite its roots in the 3D printing scene, he also wants MyMiniFactory to be a welcome environment for people outside of 3D artists, such as writers and illustrators.

“We want to cover the entire scope of digital creators, from illustrators creating maps or bespoke character sheets, or writers who could create PDF campaigns for various systems. We don't want to exclude any medium, so where the name MyMiniFactory used to mean ‘miniatures’, that's since evolved to mean a ‘mini factory’ where small businesses can take full control of their stores and how they interact with customers”.

It’s early days, but it seems to be working. Creatives are becoming well established on the site and have growing numbers of loyal subscribers and fans.

The conversation reminded me of how discouraged I felt many years ago as a young digital illustrator. As a teen, art was a passion that I spent many hours of the day on, but was never a career I had any hopes of pursuing. Given the recognizable ‘starving artist’ joke, the idea of supporting myself or even just supplementing my employed wage off my own creativity just didn’t seem sustainable, a similar story that many young artists would have told you at the time.

But what does any of this have to do with NFTs? Many of us have mixed feelings about them, if we’re even able to understand exactly what they are in the first place.

Non Fungible Tokens, often abbreviated to NFTs, are a way of authenticating digital content on cryptocurrency blockchains, primarily Ethereum. This doesn't just mean illustrations or photography though – in theory, anything can be logged as an NFT, including sound clips and even tweets, but you don’t get to own the actual asset. Instead, you’re getting a kind of virtual receipt or logbook that proves the NFT is logged in your name.

Given its connection with cryptocurrency, this system can result in people spending high amounts of cash to jump on board with the trend, often for investments or simply bragging rights. Those hideous Bored Ape NFTs you may have seen used as profile pictures all over Twitter can actually sell for thousands of dollars, despite anyone being able to simply… save the actual art to their computer drive.

While I’m sick of seeing low-effort collections like those monkeys all over the internet, there was one positive keeping me conflicted: small artists were finally making some serious money using their skills. Years of offering commissions or creating work based on the specific needs of a client could be over, leaving artists to work for themselves, on whatever they liked and still make a living.

This isn’t without risks though. Vice reported earlier this week that 80% of the NFTs created on OpenSea, one of the largest NFT marketplaces, are fake, plagiarized from actual artists or straight up spam, and many popular digital artists have found their work being fraudulently sold online by scammers making a quick buck off the talents of real creatives.

Heads up: there are NFTs of my art being sold on @twinciio without my consent. Artists, check if your art is on there too & contact/report if you can! Any NFT you will find featuring my work is being sold without my permission. Please do not buy them. pic.twitter.com/e6TJKp3ri3April 18, 2021

I still don’t agree with the ecological or social impact of NFTs, but creatives deserve a space where they can make a living, especially without the fear of their work being stolen. It’s likely that NFTs will be around for a good while yet, but MyMiniFactory offers a compelling alternative for artists to set up a growing business that has multiple income streams, across subscriptions, file sales and donations.

Strictly speaking, there's also nothing that would prevent you from getting involved with NFTs if you did sign up to MyMiniFactory. I didn’t discuss NFTs or blockchain with Nikolic, but he was clear that artists using the site are free to use any other platform they see fit, stating “we’re staying away from contracts, and we certainly won’t make artists take their work down from other stores, services or galleries”.

I hardly think that this will revolutionize the creative market overnight, but as digital content steadily develops, it’s important to ensure small businesses are well supported as their skills become more in demand. The trend of art theft is prolific within NFT sales, and I fear that things could develop for the worse as the Metaverse looms ever closer. The kind of service that MyMiniFactory is currently providing to the designers it hosts is nothing short of fantastic, and a model that I’d love to see more of in order to ensure artists get fairly compensated for their work.

Faith Through VR: Would You Go To A Metaverse Church?