we connected with NamesCon CEO Soeren von
Varchmin and the Head of NamesCon Operations, Helga
Neumer, to get the details. Soeren got the ball
rolling by explaining how the concept for a broader
“domain economic forum” came about:

DNJournal:
In looking at the agenda
that stretches over three full days of business, one
of the first major changes one sees is the
establishment of two clearly defined tracks – one
aimed at newcomers and one for industry pros
(though attendees can go to any session on either
track and everyone will be brought together for
special events, like the keynotes). In the past we’ve
seen everything from shows with a single track for all
attendees to conferences that could have an many as
five sessions going on at once. Why did you settle on
this streamlined two-track approach and the
information that would be offered on each?

Soeren:
The agenda is more focused than it’s ever been,
but it’s important for everyone in this industry to feel
welcome and empowered. This means getting
newcomers up to speed quickly so they can participate
in some of the sessions happening later in the
conference. The tracks were created as a pathway
to answering the key questions I mentioned earlier. 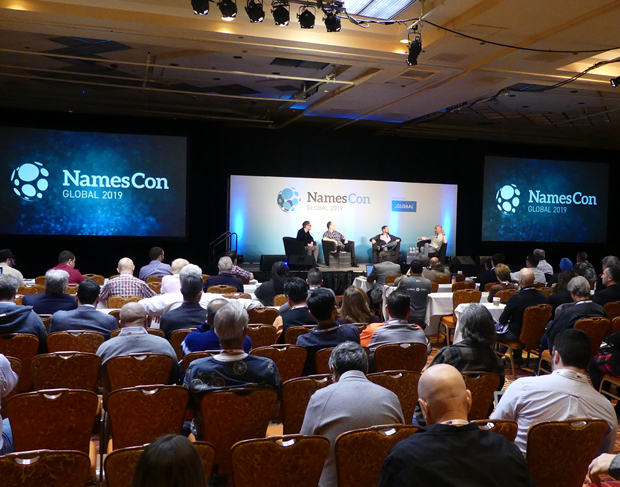 A
scene from one of the panel discussions at the 2019
NamesCon Global conference.

DNJournal:
The names
of the speakers for nearly all of the
sessions have now been posted on the NamesCon website.
Among the dozens of sessions, talks and events on the
agenda , I know you are excited about all of them but
what are some you think will be especially valuable
for 2020 attendees?

Soeren:
The Transparent Calculation Series may not
sound super-sexy, but it’s really important! Along
with a session called Where Does the Money Come
From?, we’re making some of the invisible forces
around domaining visible for the first time.
We’re also running a session on estate planning
for domainers. Many domainers have been active for
more than 15 years now, so it’s also time to look at
turning portfolios into legacies.

DNJournal:
While it is always great to see new things added to
the agenda, there are certain elements that are
instrumental in making NamesCon Global what it is and
one of the most popular of those – the live domain
auction – will be back. But even the auction on January
30th will have a new twist this year as it is
being moved onto the GoDaddy
auction platform while Monte Cahn
and his RightOfTheDot.com team return to
orchestrate the live action in the Omni Hotel
Ballroom. How is the catalog for this year’s sale
shaping up and how will the new platform improve the
event?

Soeren:
GoDaddy’s auction platform will take the live
auction to the next level, and some amazing names have
been submitted. It’s exciting to see the pre-bidding
take off. Add.com is already over $130,000,
and lots of great keyword names are attracting
attention, like Shirts.com, Laptop.com, RentalHomes.com,
LegalFees.com and Singl.es. Some have
hit their reserve already! 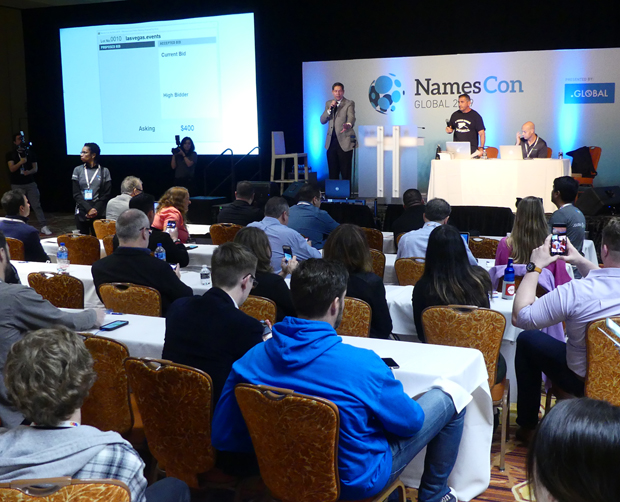 A
scene from the Live Domain Auction at the
2019 NamesCon Global conference in January 2019.

DNJournal:
We’ve talked about Austin, but more specifically,
should also touch on the conference’s new venue
– the downtown Omni Hotel. I know you did an
exhaustive search of Austin facilities before settling
on the Omni. What drew you there?

Soeren:
The Omni has such a prime location. If Austin is the
center of the startup world right now, the Omni is at
the center of that. It’s the bullseye.

DNJournal:
NamesCon has sold out of both of the two blocks of
rooms you had secured at the Omni,  but I
understand you have located some additional rooms in
hotels that are very near by.

Helga:
Yes, we arranged special attendee rates at the Driskill,
which is a historic site; and the Proper Hotel
Austin, which just opened. There’s also space
for us at a really cool place called Aloft,
which will let you borrow a pair of cowboy boots for
the day! 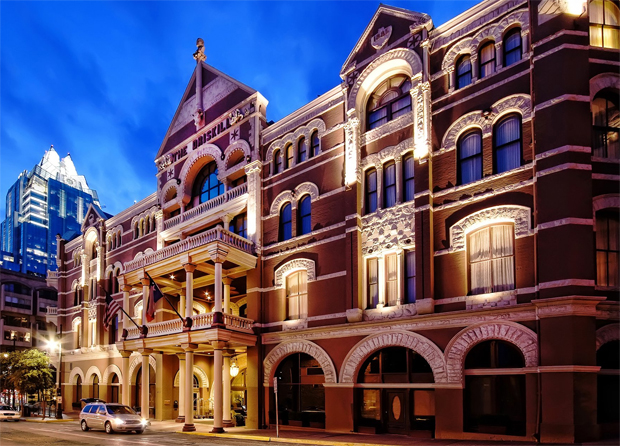 The
historic Driskell Hotel In Austin – one
of three hotels where NamesCon secured
special room rates for NamesCon Global 2020
attendees after the Omni Hotel sold out.

DNJournal:
Before we let you go, is there anything you would like
to add about what’s ahead at NamesCon 2020?

Soeren:
If you’ve been wondering whether NamesCon is for
you, we’re telling you that it definitely is!
If you work in the domain industry or as an investor,
your voice matters, and this is the place to use it.
Let’s get together in Austin and change the game!

Helga:
For DNJournal readers, we also have a 30%
discount in place for now to make the
decision a little easier! We look forward to learning
and celebrating with everyone from this friendly
industry.

DNJournal:
Soeren and Helga, thank you for your time. We look
forward to seeing you in Austin!